The Lunar Eclipse of 7th August will be visible over Indian subcontinent and maximizes at 23:50:29 hrs. This will also be the day when Indian folks observe Raksha Bandhan when girls tie a sacred around their brother’s wrist. Many Indians will be sleeping around this time. This eclipse occurs in the Capricorn – Cancer Axis, which indirectly is the 3-9 axis of India’s horoscope where relationship with neighbors will get activated. Covert operations, hidden and secret enmity will surface once again. Moon will be at 21deg 24min 22sec Shravana Nakshatra. I am posting the chart of Lunar Eclipse below for easy reference. 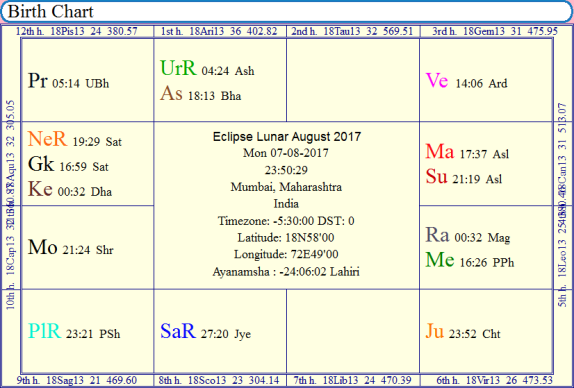 Likelihood of trouble escalating on and after 29th October 2017. Natives who have planets in the Nakshatra of Rohini, Hasta, Bharni, Ashlesha and Vishakha are affected by this eclipse. They may suffer financially, health or on other fronts. Trouble can be expected from hidden elements in forests and aquatic areas.

A total Solar Eclipse follows on the 21st August which is quite potent in a way because Saturn, the judge is nearing its steady state. Saturn will be rock steady for days together following the eclipse. This will be the strongest planet for this eclipse horoscope. I am posting appropriate horoscope below. The judge in Scorpio may decide to conceal ALL or reveal and expose ALL. There will be much secrecy involved. Hidden elements in work area, across the seas and within the government have a role to play. 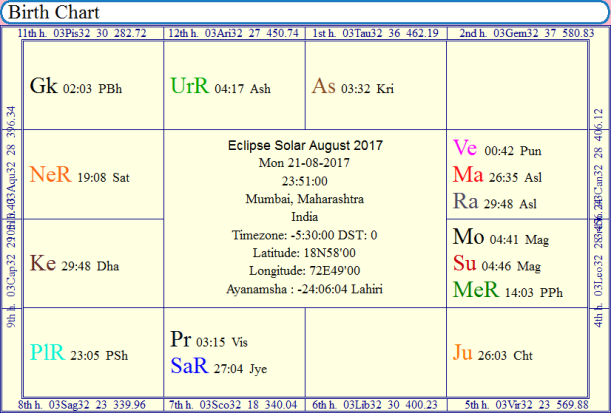 This Eclipse will not be visible in India, instead this eclipse is much awaited event for the people of USA because the path of this eclipse cuts thru America in half. The totality of the eclipse will be around 23:51 Hrs IST on the 21st August 2017. The eclipse occurs in the Leo, Aquarius axis with the Sun in Magha Nakshatra at 4deg 46min 29min. Natives who have planets in the Nakshatra of Ashresha, Vishakha, and Krittika are most vulnerable. For some the consequences could be disastrous.

For those in power in the US, this will be an uncomfortable position (please wait for Mr. Donald Trump’s horoscope analysis in a separate post).

I was introducing to Mr Battu by a friend when I was on cross roads and was left with no hope . Guruji asked me to send the birth details along with my life events . Within a few days , he sent me the reading along with the remedies which I followed religiously. I … END_OF_DOCUMENT_TOKEN_TO_BE_REPLACED